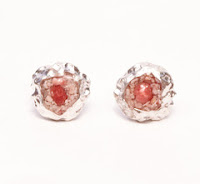 Tonight I went with Aziza to the Moonlight Bazaar at Moon Nightclub. It starts just after work with happy hour and various stalls set up. I used my voucher for my friend Alexandra Mosher's jewellery. Her website is here. Her stuff is absolutely beautiful. I got Bermuda Reef earrings featuring pink Bermuda sand and they're pictured here.

The two-year anniversary of my father's death is coming up shortly. I found myself a bit tearful yesterday out of nowhere, whilst I was driving the car. I still can't believe he won't see me get married, or know my children. I got 24 years with him, and it will never feel like enough. But, I realise it's all part of life, not depression, and though grief will stay with me always, depression won't necessarily.

On July 7, 1981, President Reagan announced he was nominating Arizona Judge Sandra Day O'Connor to become the first female justice on the United States Supreme Court. Brings us closer to breaking the glass ceiling.

Ringo Starr's birthday is today. So, again, some Beatles for your listening pleasure. I love With a Little Help From My Friends, because it was the theme song from The Wonder Years.