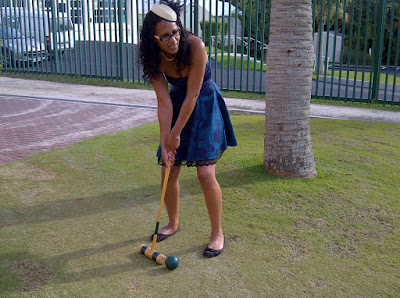 Ahhhh....what a fabulous day today turned out to be. I thought I might be exhausted post-raft-up, but I actually was quite chipper. I went to a surprise bridal shower for Elyse who's wedding is in Toronto in August. The theme was "Sunday Best" and there were prizes for best hat and I came 3rd (out of 20 - boomshackalacka!). I am actually quite competitive, and there was bridal jeopardy and my table didn't have any of Elyse's family members so we were quite worried. But we became very rowdy and actually ended up winning (though I think we annoyed everyone else at the shower, but hey, winning comes with a price). I also won a raffle prize, so I left with a bunch of booty (not to mention stealing a load of cupcakes). What I didn't win at? Croquet. In fact, I lost so terribly that I'm concerned for my hand-eye coordination. Even though I'm clumsy I was always very good at sports, perhaps lack of doing them has made me lose all my natural ability. Ah, well.

Today, June 3rd, in 2005 same-sex marriage became legal in Spain. The remaining countries without it.....it's your turn. I will never stop pushing for this.

A member of the "27 Club" Jim Morrison today died at the age of 27 in Paris, France. I've been to visit his grave at the pere lachaise cemetery myself. In tribute to him I'm sharing "People Are Strange" by the Doors:

Today's Quotes comes from the German author Franz Kafka who was born on this date in 1883.

"A first sign of the beginning of understanding is the wish to die."

"Anyone who cannot come to terms with his life while he is alive needs one hand to ward off a little his despair over his fate... but with his other hand he can note down what he sees among the ruins."
Bermuda weddings