July 25, 2011
On July 25th, Louise Brown, the world's first test tube baby was born. Now I know that many people feel this is immoral, but I am not one of those people. I am celebrating the fact that so many parents, wonderful parents, have had the opportunity to raise a family thanks to this scientific advance. 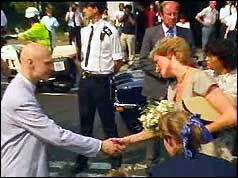 in South West London. The prevention and search for a cure for HIV/AIDS is a cause close to my heart. I have known quite a few people who have succumbed to the disease and it's truly heartbreaking. Princess Diana's work with HIV/AIDS patients really helped to educate the public and remove some of the stigma associated with the disease. In early 2001 Landmark's services were integrated with Lighthouse, part of the Terrence Higgins Trust. The National AIDS Trust recognised Princess Diana's work in de-stigmatising the illness when they started the Diana Princess of Wales Lecture on AIDS in 1999.