June 03, 2011
When I discovered today was the anniversary of the Portland Rum Riot in (1855) I knew I had to write about it. The riot was in response to the prohibition of alcohol. Being Bermudian I have a very close relationship with rum, mostly Goslings' Black Seal Rum, made in Bermuda. I can only imagine the rioting that would occur in Bermuda if that happened. After all we are jokingly referred to as 60,000 alcoholics clinging to a rock. Unfortunately, my day didn't involve rum, but fortunately it did involve lots of champagne and wine because....an agency wants to take me on. So that was great news ahead of my Bermuda return, especially because I now have a sponsor for my visa. Residency in the US here I come (hopefully).
Before I received that news I brunched 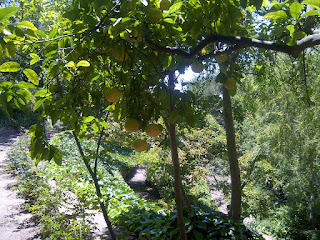 with my friend Olivia who was visiting from NYC, and is going to move here in a few months. Apart from just the joy of her lovely company I also found a future roomie. Excellent. After brunch we visited her family in their lovely Brentwood home, somewhere I hope to spend a lot of time in as it's got a beautiful sanctuary-esque garden with path and tennis courts. Pictured is a lemon tree in the garden. 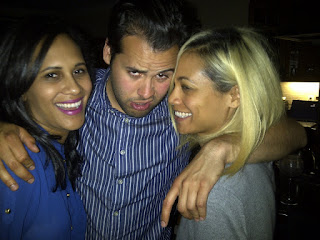 My sister finally came to visit my new home along with our friend, Clint, who is conveniently also a hairdresser and my split ends were getting a lot unruly so he kindly also cut our hair. Clint blogs here and he's just lovely and super talented with the scissors. We were meant to go to Santa Monica after our pizza and wine to see Caught a Ghost (who I blogged about here) but ended up having too much fun having youtube music video battles and then we had too much to drink to drive and responsibly had a sleep-over and took lots of silly pictures of our new hair.


One of the songs I shared was one of my favourites, both musically and video-wise. Incredibly stop-motion that took 48 hours to film. It's Oren Lavie's Her Morning Elegance:

And as tribute to Clint I'll show one of the videos he shared, which is absolutely incredible. Janelle Monae's Tightrope feat Big Boi. Unfortunately, embedding is disabled so just click here.