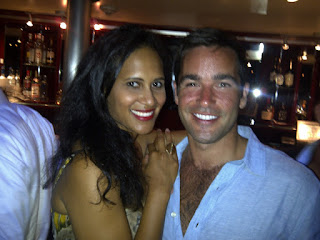 
In other broadcasting news, I have to admit to naughtily post-timing the blogs, because often it's the wee hours of the next day and I can't possibly write about my day, but I'm excusing myself because I need to time each day as the day I celebrated, all for the sake of the blog. So there you go. 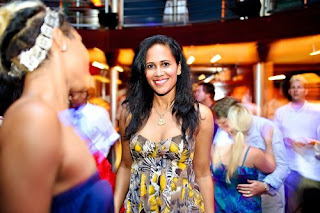 So tonight I went to Christie & Ramon's after-party for their beautiful wedding. And it was the first test of my new-found sobriety. After Friday night made me feel terrible from just three drinks, I decided to cut-down drinking as close to cutting-out as possible. Apart from the fact that it doesn't mix well with my medication (yes, I said it) drinking a depressant when trying to combat depression isn't exactly the best of methods (though I'm certain many a person has tried). The only good part of Friday night was running into a friend Mina, who'd moved to NYC and we spent the day at the beach together. The party was fantastic and I danced until my feet practically bled (but the fact that after a year and 2 months without heels at all, that I can now dance in them for hours, I have to keep celebrating). Pictured is myself with, Ed, who went to grad school with the lovely couple. (Update: The other photos is an official photo from the wedding taken by Alex Masters).


Today was a day for progress, and not just for my viewing pleasure. In 1978 the Rainbow Flag made it's first appearance in the San Francisco Gay Freedom Parade. And in 1993 Kim Campbell was chosen as leader of the Progressive Conservative Party of Canada, becoming the first female Prime Minister of the country.

Today is also the day, in 2009, that the world lost Michael Jackson. Celebrating his life is an easy task. Choosing which music to share?....A very difficult task. So I'm harking back to childhood memories and sharing Smooth Criminal with the introductory scene from "Michael Jackson Moonwalker" which I used to watch obsessively over and over again. Loved that film.