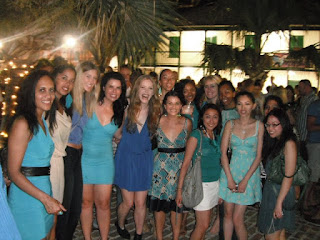 Today is a music day, just because so many things happened on June 10th that I can't help but share a lot of tunes. It's also helpful, because tonight was Aziza's bachelorette party and music featured heavily in our outing. Of course, I can't share anymore than the photo featured, as that would break the rules. However, I will explain all the blue; Aziza's favourite colour is turquoise so I forced everyone to wear as close to that as possible. Originally I had gotten it completely wrong and ordered yellow, until Aziza had to correct me. Good thing I let her in on the idea not too last-minute.

On a side note, though clearly not worthy of celebration I did find it interesting that both John Edwards and Elliot Spitzer share today's date as their birthdays. Perhaps there's something in the moon on this date that make them both horn-dogs.
I also learned tonight, courtesy of Amy, that on June 10th 1935 Alcoholics Anonymous was founded by Dr. Robert Smith (on the day of his last drink) and Bill Wilson in Akron, Ohio. Unfortunately, I learned too late to practice sobriety tonight, and though I often mention drinking in this blog the truth is that in the last three months I've cut down considerably. I max out at two or three drinks a night, because I realised that drinking a depressant wasn't exactly helping my depression! I've noticed a difference, especially as I don't spent the next day hating my life in bed.
On today's date in 2004, the world lost a musical legend, Ray Charles. But, in celebrating his life and contribution today I'm listening to "Hit the Road, Jack" on repeat just as Nadia and I did as children. We were obsessed with the song, and just thought it was the best thing ever. We rarely played anything else on the CD, but would dance around the living room to this particular one.

On June 10, 1922, Judy Garland was born Frances Gumm and here's her rendition of Somewhere Over the Rainbow from the Wizard of Oz. Childhood memories of music and magic abound.


And last, but certainly not least, today is Maxi Priest's birthday. When I was a child my mother was in love with Maxi Priest. She had a white Ford convertible and would play him continuously. I remember staring up at the stars at night as I was falling asleep in the back seat as my parents took me home from someplace or the other and hearing his beautiful music. More beautiful memories.