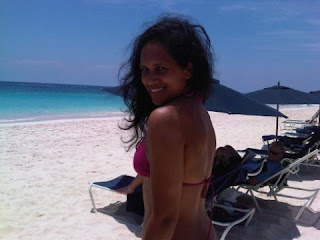 Day 2 of beaching with Mina. Sigh, life is just so hard sometimes here on-island. Actually, that is true, but there are many of us who are frustrated with island life...it just depends on how frequently that frustration occurs. Mine sadly rears its head pretty often, it's one of the reasons I'm so nomadic, but I think I might feel that way about anywhere I spend too much time in. Whenever the anxiety occurs about a return to the island, the moment I can start seeing the reefs from the plane a calmness sweeps over me and I remember that this is my home, forever and always.

Pandora is not, in this context, referring to the 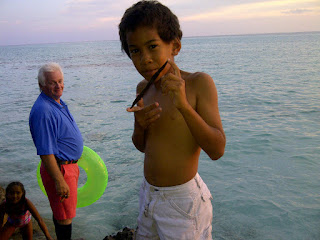 box. Although, I did just finish a play in LA all about Pandora's Box (why is it that always sounds dirty to me...I don't mean it that way!). It is the name of our dear family friends, the Nanninis, beautiful hideaway in Somerset. I love the house, and the way Sharon has decorated it. They're half Italian and the house reflects that in so many ways. My younger sister Claudia took the picture of me as I watched my little brother playing with "his knife". Gotta love a kid's imagination.

Recently, I feel like nearly every day I'm writing about how the world has progressed positively. That makes me happy, and I can only hope such progress continues, preferably at a faster pace. On today, June 26th, 1963 President Kennedy visited West Berlin and declared "Ich bin ein Berliner" as encouragement of the destruction of the Berlin Wall (which later followed). In 1996 the US Supreme Court ordered the Virginia Military Institute to admit women or forgo state support. And in 2003, the same court struck down state bans on gay sex. Now if they'll only strike down state bans on gay marriage, I'll be merrily skipping along. I do talk a lot about gay/straight rights. That's what I call them because they're not just "gay" rights, they're rights based on sexuality, and just as all races should have the same equality, so should all sexualities. Anything that leans one way or the other is dangerous to our ideas of freedom. No, I'm not gay, or bisexual, or transgender, but I'd be proud to say so if I was. And if you wish to call me any of these things...well, I'll consider that a compliment. 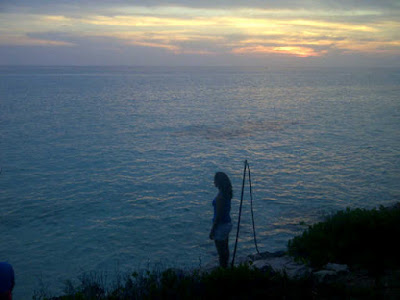