June 02, 2011
Quite a few depressing things happened today in history, but of course this blog is about overcoming depression, not dwelling on it....so I won't get into it. But there are things to celebrate, including the birth of Morgan Freeman, one of the best actors of any generation. Whenever I'm feeling a bit old and that I haven't achieved enough as an actor, I think of Freeman, who's first proper credit wasn't until he was 34 and only started achieving real recognition in his 40s. As Melissa Leo's Oscar this year showed, you just need to stick with it.


Today I had to head up to Burbank for an audition at The Polygon Group agency. It's my first theatrical agency audition, and though nervous I was looking forward to it, and I thought it went pretty well. On the way I met up with my friends Neti Leddel and Kathy DiStefano, both actresses I met when we were rehearsing for a web series that sadly never came to fruition. Far from sadly, I made friends with these two great girls. We went to Studio Cafe in Studio City, which I highly recommend. 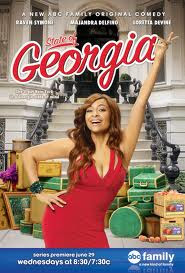 r actor Devin Williamson to CBS to see the live taping of Raven-Symone and Loretta Devine's new ABC Family sitcom 'State of Georgia' about an aspiring actress who moves to NYC. A family friend is the 2nd Assistant Director on the set and got us VIP tickets to the filming. I've never really had huge aspirations about being on a sitcom, but I am now totally obsessed with the idea. You get the best of both worlds: a live studio audience like theatre and a film crew. Perfection. The show is pretty good - check it out when it premiers.

Today's music comes from birthday girl, Alanis Morissette, and it's the secret track on Jagged Little Pill, which has always been one of my favourites of hers. It's an acappella song called Your House: