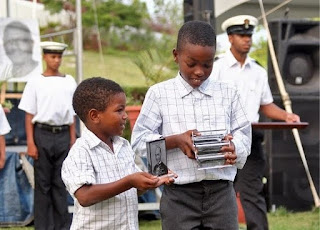 This Monday in June is Bermuda's National Heroes' Day. It was only established 4 years ago, but I think it is an important holiday to commemorate the great leaders of our society, who often get lost in the pages of today's newspapers and knowledge. I was especially proud this year as Dr. E.F. Gordon was celebrated and I am very good friends with his granddaughter. His daughter, Pamela, was the first female Premier of Bermuda. Pictured are her two grandsons, Ethan and Elijah, who collected the awards on behalf of the family (not pictured is granddaughter Elan). Dr. Gordon was a medical doctor who is regarded in Bermuda as the father of the labour movement. Being a member of the Bermuda Progressive Labour Party, I am clearly a supporter of Dr. Gordon's. He was a Member of the Colonial Parliament (MCP) and challenged racism at every opportunity. When White Parliamentarians refused to refer to him as "Dr." Gordon he changed his name to "Mazumbo" in protest.
National Heroes Day also celebrated Sir Henry "Jack" Tucker. As the recipient in 2003 of the Bank of Bermuda Sir Henry Tucker scholarship I am clearly indebted to this great man. He was the first Government Leader of Bermuda and dismantled segregation in our schools, later being knighted.

The third hero to be celebrated was PLP stalwart Dr. Pauulu Kamarakafego (Roosevelt Brown) who passed away in 2007. Dr. Kamarakafego created the Committee for Universal Adult Suffrage (CUAS) in 1960 and this lead to the later creation of the PLP. He has been honoured by the Anti-Apartheid Committee for his contribution to Universal Adult Suffrage in Bermuda, and in 1992 he was presented with the first Outstanding Human Rights Award by the Bermuda Human Rights Commission.
I have to admit I didn't attend the ceremony, but instead went to Beerfest at Horseshoe Bay (naughty me), which until a fight broke out (!), was a great day at the beach with everyone - a repeat of Jack & Water on a much larger scale (but without the free drinks!). Then it was off to Swizzle with friends (among them Amy & Olivia pictured) and a house party in Somerset, which I sadly had to leave early due to a headache - probably from all the sunshine celebrating. 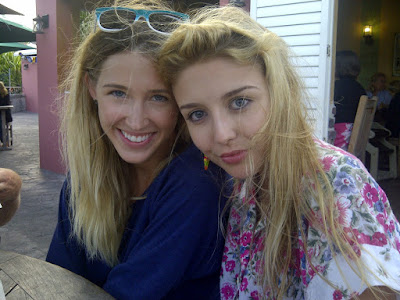