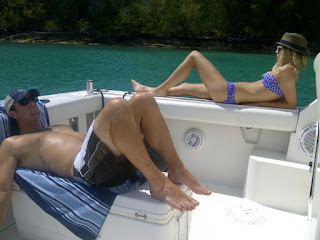 I have never read Ulysses. Yes, I admit it. So celebrating Bloomsday is a little indulgent. Additionally, it is meant to be celebrated in Dublin, but I clearly can't hop on a plane...so I'm celebrating here. Bloomsday is a commemoration of the life of James Joyce and his book Ulysses, which took place in Dublin on June 16th 1904. The day generally involves cultural activities, pub crawls and general merriment. My version of a cultural activity in Bermuda is a trip to Paradise Lakes on a boat and sitting off enjoying "nature". So that's exactly what I did with Alex and Amy (pictured). Now, if only I'd brought Ulysses to read on the boat, the day would have been complete.

After a quick change on the boat, Alex dropped me off to the dock at Newstead Hotel for a cocktail summer kick-off party hosted by BEPRO (Bermuda Emerging Professionals) and it was an excellent opportunity to see a bunch of friends I hadn't seen for four months. A few hours later I stopped off at Harbourfront for a quick drink along the waterfront with Marc & Mark. Delightful.

Today's quote comes from Abraham Lincoln, who on this date in 1858 accepted the Illinois Republican Party's nomination for the U.S. Senate stating that the slavery issue must be resolved, and declared "A house divided against itself cannot stand."

On June 16th, the three-day Monterey International Pop Music Festival - which catapulted Jimi Hendrix, the Who and Janis Joplin to stardom - opened in northern California. In honour of that I'll play my favourite of the three: Jimi. My favourite song of his has always been "Red House".