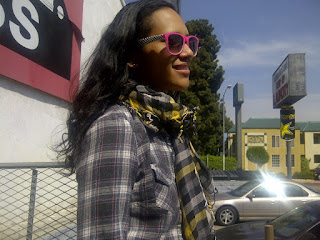 oday, April 6th, is TARTAN DAY, a celebration of Scottish Heritage on the anniversary of the signing of the Declaration of Abroath (Scottish Independence) in 1320. As mentioned in yesterday's post I am of Scottish Heritage - my lovely late grandfather Robert Bell Beattie was born and raised in Glasgow. So in celebration I am wearing as much tartan/plaid as possible today. It also helps that my comforter is tartan so I woke up in celebration. Some days this celebratory lark is just easier than others. Yes, this outfit is a little ridiculous (and with a limited wardrobe I'm more plaid/check than tartan, but it's the effort that counts). Sometimes you just gotta be cuckoo.....
Today's Music: In following with the Scottish theme I bring you "I'm a Cuckoo" from Glaswegian band Belle & Sebastian.

Today's Quote comes from Isaac Asimov who died on this date in 1992:

"If my doctor told me I had only six minutes to live, I wouldn't brood. I'd type a little faster."
family