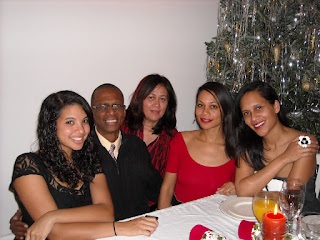 On April 5th in 1614 Pocahontas married John Rolfe, an English colonist. So the easiest thing for me to celebrate today is interracial relationships. Without them my mother wouldn't exist (Scottish-Malay), and then neither would myself or my sisters (Black-White-Yellow-Green-Everything in-between). I also think it's important to celebrate the fact that with time acceptance, both legally and socially, has improved. To really celebrate I should have gone on multiple dates with men from different races staggered throughout the day. However, that would be far too time-consuming and, furthermore, I don't quite have the inclination, nor stamina, for such a feat. Instead I just sort of celebrated me. Which is to say I spent the first half of the day lying in bed learning lines, reading fiction, watching TV and doing my nails. The thing about being depression-prone is that being active often requires an extra bit of effort, so then when I'm not doing things I feel guilty that I haven't tried. That's part of what The Year of Celebration is about - to get me out of bed and out into the world every day. But now I'm realising the guilt of not doing that could be just as damaging so instead I'm stealing from an Alcoholics Anonymous mantra - one day at a time. Or in my case, one hour, one minute or one moment, at a time. Also, I'm coming down with something so rest is quite clearly required.
Which brings me to today's quote(s), from Booker T. Washington (born April 5th 1856):

"I have learned that success is to be measured not so much by the position that one has reached in life as by the obstacles which he has had to overcome while trying to succeed."

April 5th also marks Spencer Tracy and Bette Davis' birthdays, and as I spent all evening at rehearsal (see, I did get out of bed!) I was clearly celebrating the legends in acting who have come before and the work that they inspire.

Today, in 1994, Kurt Cobain committed suicide. Of course, I was Nirvana obsessed as a pre-teen/teenager. It was when my depression/angst was all beginning and who didn't feel like Nirvana spoke directly to them? It was all a little before my time, but that didn't stop me trying to bring the Seattle grunge look to an English Boarding School in 1997.
family