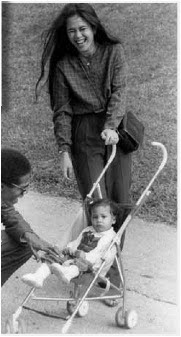 I didn't have to look anything up to know what to celebrate today. I am celebrating my mother, Isabella. Although I'm currently living in LA and Mum is living in Bermuda, we have always celebrated the English Mother's Day date, correctly known as Mothering Sunday.
Mum was born in Malaysia and moved to England for boarding school at the age of 9, later followed by her parents and brother. She met my father through my cousins' parents (yep, the same ones who inspired the Year of Celebration) who were living in London at the time. My father was living in Bermuda, and he and my mother would meet in New York. 10 months later they were married and then came the three girls: Nadia, Liana and Claudia.
As my father was the renowned lawyer in the family, most people don't know that not only did she study law herself, but it was actually my mother who encouraged me to both apply for and complete my law degree. As a result my father, my mother and I all studied Law at the University of London (but different colleges - Dad at LSE, Mum at SOAS and I at UCL).
I could write pages on how important and wonderful my mother is, but this is a blog not a book, so I'll settle for just a little about her. She's the best cook, and yes, I know that's a cliche, but if you ever come to one of the many parties, bbqs, gatherings, she hosts (especially in the summer) you'll understand. She's not a perfectionist and she often starts drinking the wine before finishing the food, resulting in overcooked beef, but it's still the best food I'm ever going to taste. She's also loud, sometimes embarrassingly so, but mostly affectionately so . She gets overly excited and has a truly infectious laugh and she takes our ribbing very well. When I was a teenager and began to suffer very badly from depression, she took it upon herself to read every book and article possible to better understand me. Her Asian/English upbringing made it quite difficult for her to relate to this side of me, but she completely educated herself to help me. Though I feel I don't acknowledge my need for her enough, I never would have made it through my father's death without her. She became a mum again later in life to Saladin, who's now 7 - so she finally got her boy, and her energy and enthusiasm for her 4th child reminds me that she's the person who makes me want to have a big family - so I can be like her.
The baby in the picture with my mum and dad is actually my older sister, Nadia. Being in LA, I'm living like a nomad so have access to very few photos. In fact, I'm leaving shortly to pick Nadia up from LAX so we can call our beloved mother together. Of course, I would love to celebrate with her, but being 3,000+ miles away it's a tad impossible so I'll celebrate her from afar.

Today's Music: When I was a child my mum had a white, Ford convertible and our parents would take us everywhere. My father hated driving (and was truly terrible at it) so my mother was the driver in the family (she has what one might consider an unhealthy obsession with Formula One, frequently setting her alarm at all hours of the night to catch the Grand Prix live in whatever country it's in. In fact when we lived in England the timing of our Sunday Roast was dependent on F1). One of my strongest recurrent memories is driving at night, with the car top down, and drifting away to sleep as my mother sang along to Maxi Priest and UB40. That's the music for today and it's playing through my laptop as I type.


Today's Quote: "All these trials and tribulations are all just part of life's rich pageantry" (said whilst drinking red wine out of her waterford crystal) - My Mum, frequently.
family reggae