April 04, 2011
Today in 1850 Los Angeles was officially incorporated as a city. Being that it's the city I currently live in, it's a conveniently easy thing to celebrate and I thought I'd do all things LA. However, rehearsal for two plays, an off-book deadline and class this evening interfered with anything too elaborate and as I got my 4th parking ticket since arriving here this morning (very LA), it also ruled out anything too expensive. So I just went for a hike up Runyon Canyon with my sister Nadia for a view over the city. Note to self: If going the steep way up, remember to eat lunch beforehand. The blurry vision and pounding head were not particularly celebratory. 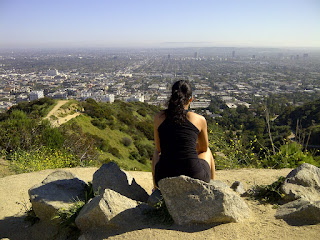 Today's Music: In 1964 on April 4th The Beatles occupied the top FIVE positions on the Billboard Hot 100. I listened to a lot of them this morning, but chose to share the Glee version of I Wanna Hold Your Hand. The slower tempo makes for a melancholy tone and of course the sickly father storyline tugged at my heartstrings:

"My mission in life is not merely to survive, but to thrive; and to do so with some passion, some compassion, some humor, and some style"

- Maya Angelou, Born April 4th, 1928 (it was nearly IMPOSSIBLE to choose only one quote from this literary giant!)
exercise LA