April 25, 2011
Ok, so I've been AWOL for awhile. I did, at the beginning, admit that I would probably not be able to commit to this every day. It's part of my fear of commitment...to a person, a job, a place. As much as I was enjoying blogging, I set myself up for failure by sort of requiring myself to do it every day. But here's attempt number two...no doubt I'll stumble again and feel unable to find a way to celebrate, but it wouldn't be interesting if it wasn't difficult, right?


This week I watched Stephen Fry's documentary "The Secret Life of the Manic Depressive". Stephen Fry has always been someone I deeply admire (as mentioned in this interview from 2008). I didn't even know back when I did that interview about his struggles with manic depression. My favourite film was written and directed by Fry (and features James McAvoy who's birthday was sometime in the week that I disappeared), based on Evelyn Waugh's Vile Bodies: Bright Young Things. So here's one of my favourite scenes (for the writing, not the tragic end - though fitting for a blog related to depression):

And here's a clip from the actual documentary. I know that I can very much relate with Fry, especially in this segment, and I wonder how many others do, what the real percentage of people is as opposed to those who've been diagnosed or examined and treated.

This is a blog about celebrating, and I realise this post has been 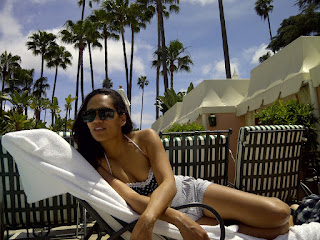 a bit more about the illness or disorder of depression itself, I suppose because to be able to celebrate one still needs to find out the cause or the foundation of what Churchill called his "Black Dog". Finally on Easter Sunday I motivated to celebrate. My darling friend Silje was in LA just for the weekend and we spent a delightful morning brunching at the Beverly Hills Hotel poolside. A large, fluffy Easter Bunny was going around delivering chocolates, but disappointingly skipped us (it was probably quite hot in the suit in the sunshine). The morning started a bit rainy, but cleared up about an hour before I had to leave for rehearsal for Sand in the Air (check out the event on Facebook here). The rest of the sunshine was spent indoors as we open this week, but I was doing something I love so it felt celebratory. Especially when I left at 9pm to join a house party predominantly taking place in a hot-tub and met lots of new lovely people. All in all a great evening (except for the accidental consumption of ants...which as it turns out are really quite spicy). Some weeks are just awful, but they can end quite beautifully.