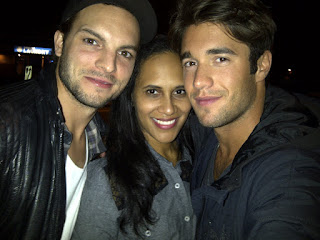 Many of my posts recently have been about advances in civil rights, which is great because I get a retrospective in how far we've come, especially in the last century. Today in 1967 Australians voted in favour of a constitutional referencdum which would grant the government the power to make laws that benefit indigenous aboriginal Australians. A phenomenal thing to celebrate.
This weekend is the last weekend of Sand in the Air. We end tomorrow night. Tonight I had four friends come and see the show, which pleased me greatly. Afterwards, Josh, Matt and I went for drinks at Bar Pico, before I disappeared off to more beverages in Santa Monica. Josh's pilot "Revenge" was picked up by ABC and he'll be filming just up the street from me in Manhattan Beach come July. Please check it out in September when it premieres and until then watch the trailer. The pic is of the three of us.

Sadly Gil Scott-Heron died today. A man who lived an interesting, yet often self-destructive, existence was one of the best musicians of this century. I am saddened. He is gone too soon. Here is "The Revolution Will Not Be Televised".