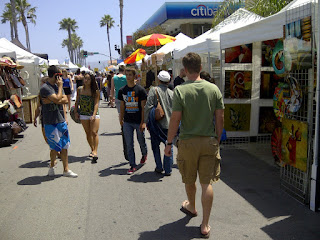 As I'll be heading back to Bermuda in a couple of weeks for about half of the summer I decided to experience a little LA Culture at Fiesta Hermosa. I stumbled on it semi-accidentally because I was in the mood for chicken and waffles and googled somewhere near my place for it. I found Boogaloo's a Cajun/New Orleans style restaurant and hoped they might have similar food. Unbelievably, I managed to find parking right at the entrance to the fiesta and went for a hefty hangover breakkie along with the necessary bloody mary. However, I was a bit disappointed with the food and then even more annoyed as when I walked around Fiesta Hermosa there were loads of more delicious smelling food stands at a fraction of the price.

In the beer garden there was 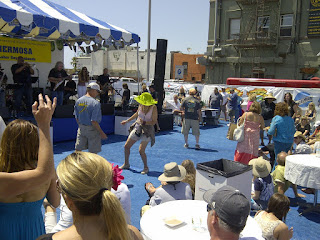 a band playing, but the most entertaining was the older women dancing to the band. I just had to share pictures of them, because their outfits were outrageously hilarious. The one with the pink top was killing me with her early 90s throwback and the hat on the other woman was fantastic. Her dancing partner also knew how to get down. 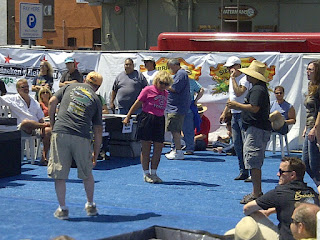