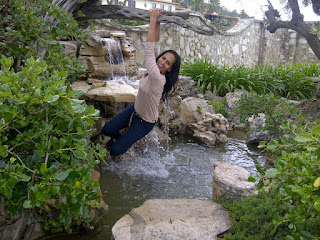 Today's post has a little bit of history, but mostly is about how I celebrated the day. Sometimes I realise celebrating is just about what I want to do without guidelines, without rules, and just going moment to moment and enjoying every single one of them. I recently moved in with my dad's friend Tal to his beach-house in Redondo Beach. I can wake up and smell the ocean and have tea on the roof terrace or wine in the evening. It's hard not to feel inspired here. Today I went to brunch in our little village at Sophie's. Great food, sadly terrible service, but because they're understaffed not because our waitress wasn't lovely. Bottomless Bloody Marys and Mimosas were in order so I was feeling pleasantly buzzed by 1pm. After which Tal took me on a little tour up the coast of Palos Verdes. We came upon a church, which used to be the oldest home in Palos Verdes, and where I decided to swing like a monkey. Then Tal took me to see some beautiful bougainvillea and his version of blue steel. I was amazed at the beauty just up the street from me, and fully intend to hike the trail that borders the ocean one of these days. 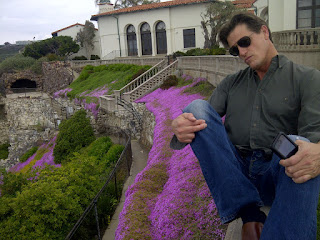 Today's Music is Frank Sinatra's My Way. Frank died today in 1998 at the age of 82. My Way is chosen because it was my father's favourite song, and he sang it from when he was young until the end of his life. I sang it to him whilst he was in his hospital bed (even though I have a terrible voice and forgot the lyrics!), but it will ALWAYS remind me of my father, so thanks Frank for this rendition, because I sadly don't have video of my dad doing it.

I'm in the middle of my play Sand in the Air, so back on stage I go.
bevvies Dad LA