May The Fourth Be With You 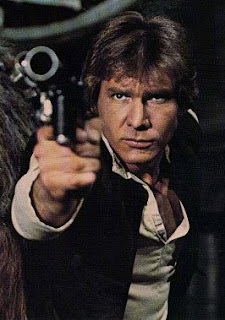 Well today is officially STAR WARS DAY!! Like many, many people I watched all three original Star Wars on repeat throughout my childhood. And of course today I'm celebrating the one, the only, the sexy....Han Solo. I wanted to be Princess Leia not for the amazing braid danishes, but so Han would love me....sigh.
Lots of other things to celebrate today including the fact that it's the 84th Anniversary of the founding of the Academy of Motion Picture Arts & Sciences (without which we would have no Oscar which I'm going to win in a few years) and the date in 1959 that the 1st Grammy Awards were held. A day of movies and music...yes please!
Today's Quote comes from Ernest Hemingway's The Old Man & the Sea, as he won the Pulitzer Prize for it on this date in 1953.
"Every day is a new day. It is better to be lucky. But I would rather be exact. Then when luck comes you are ready."
books movies