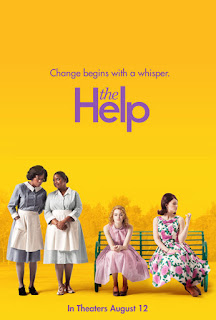 I'm not sure if I've mentioned it before, but I'm in a Book Club called B3 (Bermy Book Babes). Clearly, an all-female book club, it's a great chance to open my mind to books I wouldn't usually read and have a good old natter once every couple of months. One book we read a few months ago was The Help, which I thoroughly enjoyed. I went to see the film tonight with Aziza and my younger sister Claudia and it was very faithful to the book. My only issue was that, and I know this sounds controversial, but many in Book Club agreed with me, that the Black women couldn't stand up for themselves, and they needed a White woman to essentially come to their rescue and make them see the light. The book was written by a White woman, so I can see how it would be told from her perspective. But it was an extraordinary book, and an excellent story.

Here are some quotes from the film:

"Fried chicken just tend to make you feel better about life."
"If you can love your enemy, you already have victory"
"You is kind. You is smart. You is important."

Today is the birthdate in 1888 of T.E. Lawrence, aka Lawrence of Arabia. Lawrence's death, by motorcycle, inspired his neurosurgeon Hugh Cairns to begin a long study, which resulted in the creation of crash helmets. Whilst his death at the young age of 46 was tragic, the result of it, enhanced safety measures IS something to celebrate. As a moped-rider in Bermuda, and someone who has witnessed in my community many fatal road traffic accidents I know how important such measures are.
Bermuda books movies
Location: Hamilton, Bermuda