"Think only of the past as its remembrance gives you pleasure." 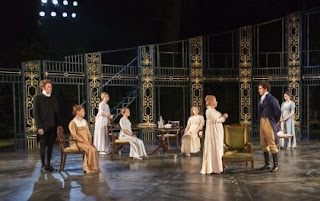 Oh, Mr. Darcy! There are few literary lovers that live up to that of Mr. Darcy. So, therefore, it's quite a feat to act the role as there's a lot of pressure on that thespian to make women's heart race, to portray cold and reserved, yet filled with emotion. I went to the Open Air Theatre in Regent's Park last night to watch a production of Pride & Prejudice. 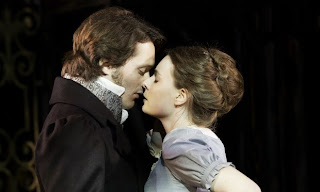 The genius of Jane Austen's work is that the story itself is so brilliant that it transfers well from book to play to film. So let's deal with Mr. Darcy first. I must say the actor playing Darcy managed to portray him very well and exceeded expectation. I say that because just as when I watch Romeo & Juliet (which I did a couple of weeks ago in another open air theatre, which featured my good friend Jason Eddy) I am prepared to dislike the actor who plays Romeo, because he couldn't possibly live up to my fantasy. The same goes for Darcy and Colin Firth definitely raised the bar on that one in the 1994 film. However, hats off to David Oakes for fulfilling my girl crush. I also enjoyed the performances by Rob Heaps (Mr. Bingley), Timothy Walker (Mr. Bennett), Frances MacNamee (Caroline Bingley) and Yolanda Kettle (as Jane Bennett). Bingley and Jane had great chemistry. The scene in which Lizzie declines Darcy's first proposal in the most cutting manner was especially enjoyed.

This continuing heat wave in London of course makes these open air performances possible. It's going to be 32 degrees tomorrow. Another fun weekend planned of dinners, picnics and a girls' night out.

"There is a stubbornness about me that never can bear to be frightened at the will of others. My courage always rises at every attempt to intimidate me."