April 03, 2013
London: Love/Hate Affair. I have been utterly miserable for the last few weeks. I've been homeless (let's not exxagerate, Liana, you have been staying in spare bedrooms at lovely friends' lovely flats, says my inner self). I've lost my laptop. Yes, LOST. Not stolen. Not misplaced. LOST. Because I am a moron. To be fair, with all the moving around I was carrying so much of my stuff, shuffling from one fantastic friend's flat to another. I was overwhelmed, flustered and getting soaked in the rain and somewhere along the way the laptop disappeared. Woe is me. First world problems. Wah. Wah. Wah.


And then suddenly, this past weekend, I was alright. Not fantastic. Not great. But alright. Surviving. I was staying at my friend Zoe's flat and she and her boyfriend Ben had gone away for the weekend and for the first time in a month I had some proper sleep. I slept all day Friday and Saturday and I suddenly felt normal. I hadn't even realised I was sleep-deprived. I certainly hadn't realised how much lack of sleep was affecting my sanity. In the space of a few days I went from feeling as though I needed serious psychiatric help to feeling fine, even perhaps a little optimistic. 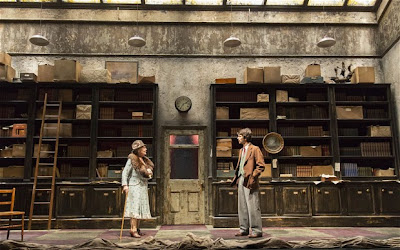 Yesterday, my other friend Zoe (yes, another one) asked me in the morning if I'd like to accompany her to the theatre, as her date had abandoned her last minute. I emphatically responded in the affirmative as it was a play I was dying (or willing to kill) to see; Peter & Alice starring Judi Dench and Ben Wishaw. I have been yearning to see Judi Dench perform on stage for many years. I saw an obscure mini-documentary a couple of years ago, which revealed Dame Dench's process of rehearsal and performance and I was stunned to learn even she has breakdowns prior to opening night. She was inconsolable at the prospect of opening a Shakespeare play (I can't remember which one) and feared for her perceived inability to deliver a good performance. She's Judi Bloody Dench. It made me love her even more.

As for the play: Beautiful, yet richly devastating. I hadn't read up much on the play and didn't really know anything apart from the fact that it revolved around the real-life inspirations for Peter Pan and Alice in Wonderland. I was actually expecting a two-person play, but there was a cast of about seven or eight. About a quarter of the way through I knew I was deeply touched, because I felt like I never wanted it to end. I could have spent hours watching this story unfold. The ever-changing sets, the multiple characters, the facts of Peter and Alice's lives, the performance of lines from the eternal books all woven together to produce a gorgeous, nuanced production. And yet, I felt sad. The books themselves make you yearn for a simpler, childhood belief in magic and the play did the same. I had come to the conclusion many years ago, that I couldn't really remember a time that I've been truly happy since the age of six. This play reminded me of that assessment, but I was also comforted that in the past few years that statement is no longer true. Since my diagnosis, I have been able to manage my emotions and have felt the glorious highs of true happiness, not the artificial ones from a manic episode, which are immediately ruined by reality. Yet, during the play I was plagued by the remembrance that childhood is so short. It is such a small part of our long lives (well, hopefully - as it was pointed out in the play, the only boys who never grow up are the ones who die), yet it forms and shapes us irreversibly. These people were forever immortalised in print, as children, yet they had to grow old or perish young. Their experiences were similar, yet their perspectives often differed through the tragedies they had faced. In the end, neither's fate was what we would have wanted for our adventurous Alice and our pirate-conquering Peter. It made me wonder about my own fate and what little Liana would have wanted for me. I recall as a child staring in the mirror and wanting to meet my older self, just so I knew what she would look like. As much as I tried I could not imagine it. I yearned to become a beautiful swan, as I was a lanky, frizzy-haired, ugly duckling. Have I disappointed myself? No. I am comfortable with who I am, even though I am plagued by multiple insecurities, as is the next person. Yet I mourn and grieve for my long-gone childhood. I realise I long to be back there and that thought troubles me. The play, undoubtedly, brought me to tears and I was comforted by the fact that my sniffles were masked by others; that they shared in the torturous beauty of what had unfolded. I kept thinking about the children I have not yet been blessed with and how I can't wait to take them on fantastic literary adventures with Peter and Alice and Anne of Green Gables, Winnie and Piglet, Mowgli and Baloo, Prince Caspian and all the other beautiful characters that inspired me in my youth. I am envious of the magic that yet lays in wait for them.

I took a few moments last night to assess the last month and I realised I had a list of things to be immensely grateful for and that London has been good to me. I have amazing friends who would never let me go without a bed. I've had help moving  my suitcases across London. I've seen two great concerts, a phenomenal play and am on track to see another next week (Book of Mormon). I've been exposed to so much culture and art in the last few weeks, more so than the few months before that. It has been cold and yet I have been warmed by the friends I usually see not more than once every two years. I love and I am loved. Could little Liana have asked for anything more?
acting London theatre