Hello, My Name is Elder Price

April 12, 2013
In the space of a week I was lucky enough to see two plays in London's West End and they couldn't have been more different from one another. As explained in last week's post, Peter & Alice inspired in me such depth of thought regarding my own life. Book of Mormon on the other hand just allowed me to escape from my life for a couple of hours.


My relationship with comedy is an awkward one, because whilst I love a good laugh, I also rarely choose to watch comedies so it's up to someone else to suggest them. The lovely one always remarks that unless a film makes me cry I'm uninterested in watching it. That's entirely untrue. I just enjoy films with depth and meaning (and maybe a good dose of death). Whenever I attempt to watch comedy I prepare myself to be disappointed, because frankly, most of the time it's not that funny. Yes, it can be mildly amusing or quite funny, but it's rarely leaving me in floods of tears (I suppose maybe the litmus test for any entertainment is to bring me to tears, whether through sadness or laughter). 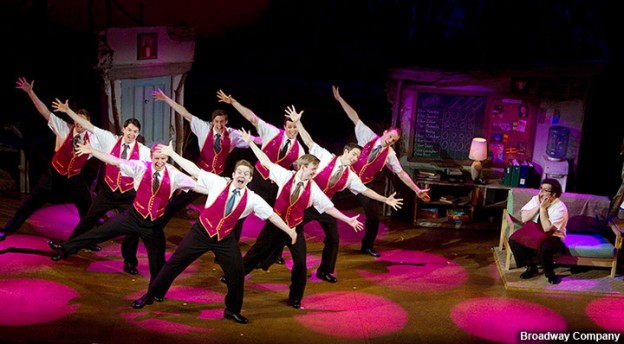 As for the Book of Mormon, I was prepared to maybe like it a bit. I stopped watching South Park (Book of Mormon is by South Park creators Trey Stone and Matt Parker) before I left my teenage years, because the humour began to become lost on me. Yes, there had been rave reviews about Book of Mormon, but as with most things that become overly popular I was certain it would be overrated.


My assessment: very, very funny. My flatmate Martyn warned me of the vulgarity before I saw it and so I was actually prepared to dislike it, because I was concerned it would be cheap humour. However, it was actually quite an intelligent critique of an organised religion who are intent on converting just about anyone. I don't want to overly complicate this review because the point is that my enjoyment of the play was quite uncomplicated. Quite simply, it was hilarious and I greatly enjoyed it. The story follows a pair of Mormons, Elder Price and Elder Cunningham, as they embark on their first assignment to baptise Ugandans in a remote village. Price is a dashingly handsome overachiever, whereas Cunningham is a short, overweight geek with a propensity for telling tales. The reality of the village differs very much from their expectations and the journey to convert the villagers is fraught with hilarity. To illustrate: the play involves sex with frogs, clitoris faces and a warlord with a name that involves a reference to buggery.


Tickets are sold out months in advance, but it's worth the wait as far as I'm concerned. I'm not good at planning that far in advance, because I never know where I'm going to be in a few months, but I'm beginning to learn to settle in and really commit to a place for a time. Surprisingly, it's actually quite liberating and it's calming my mind.

For a glimpse of The Book of Mormon view this clip from the Tony Awards' opening number by the cast: