"The purpose of life is not to be happy. It is to be useful, to be honorable, to be compassionate, to have it make some difference that you have lived and lived well."


Since my birthday post much has happened: I've been to New York, then back again to Bermuda and now I have been back in London for three weeks. Moved into a new flat. Suffered from the flu. Done a bit of work. Submitted some writing to literary agents (fingers crossed). Definitely not been blogging (note to self: must work on consistency).

I suppose the most intense experience of the last couple of weeks has been appearing on the BBC Breakfast red sofa again to discuss my experiences with Bipolar II disorder. NICE (National Institute for Health and Care Excellence) released new guidelines to assist health practitioners in diagnosing and managing Bipolar disorder earlier, especially in young people. The current average length between first complaints of symptoms to diagnosis stands at 13 years. It took 12 years for my own diagnosis and I thought that was frightfully and unacceptably long, especially as I believe had I been given a proper regime of medication due to a correct diagnosis my suicide attempts may not have ever occurred. I was privileged enough to appear with Sophie Corlett from the mental health charity Mind, an organisation I've supported and blogged about before. The incomparable Stephen Fry is the President of the charity and I've loved him before I knew either he or I were Bipolar. He actually appeared on the same sofa the day following my appearance to discuss his new book, his cocaine addiction and his diagnosis. I missed him in the studio by one day! See the vid here:

What I've been most overwhelmed by is the responses on Twitter, Facebook and comments to the BBC from both strangers and friends. I had hoped this would help a few people, but it's had a further reach than I could have imagined and for that I am grateful. I was only trolled by one person - and of course sensitive me focused on that one person for 24 hours, rather than the others who were so positive. I allowed myself to wallow and accept and now I'm over it.

For the third time in the space of a week BBC Breakfast has featured a mental health story. This morning Mind and fellow blogger Charlotte Walker came on the show to discuss the new pilot schemes launched by the Government to help the mentally ill gain, return to or keep work. Thankfully, this isn't mandatory for those on Employment and Support Allowance in order to keep their benefits as that sort of pressure isn't helpful. I haven't talked about it much before, but this is of particular interest to me because last year when I was diagnosed with panic disorder, the labour union I was working for let me go as I was having symptoms in the office of shaking, crying, sweating and vomiting and couldn't help but hide in the bathroom. I was a temp so they shouldn't have needed to offer me an explanation in letting me go, however I had been working 3 months continuously by then so accordingly I did have some rights. They called me an hour before I was due in for work that morning, informing me they no longer needed me. It doesn't seem that this could possibly be a coincidence given my request to take some time to attend a Bipolar workshop and Cognitive Behavioural Therapy sessions. I had legal recourse, but I chose not to go down that route, because I wasn't strong enough to stand up to them. I've barely worked since then, which was last summer, both out of fear that I would let my employer down again and that I wasn't fit to work because of it. I'm feeling far stronger now and ready to really dig my teeth into something, but now it's a process of finding an understanding employer.

My mood has improved considerably over the last month and the stability of returning to life in London is helping along with the introduction of another medication. Sometimes I worry about blogging when I feel good, because the crash might be a disappointment to my readers, but I suppose that's the thing with Bipolar disorder - the ups and downs are inevitable.

There's an excellent piece on Huffington Post by an illustrator who has drawn her experiences with Bipolar Disorder. As they say, a picture is worth a thousand words. I have tried to write and speak about this condition on numerous occasions, but her work can do it better than I ever could: 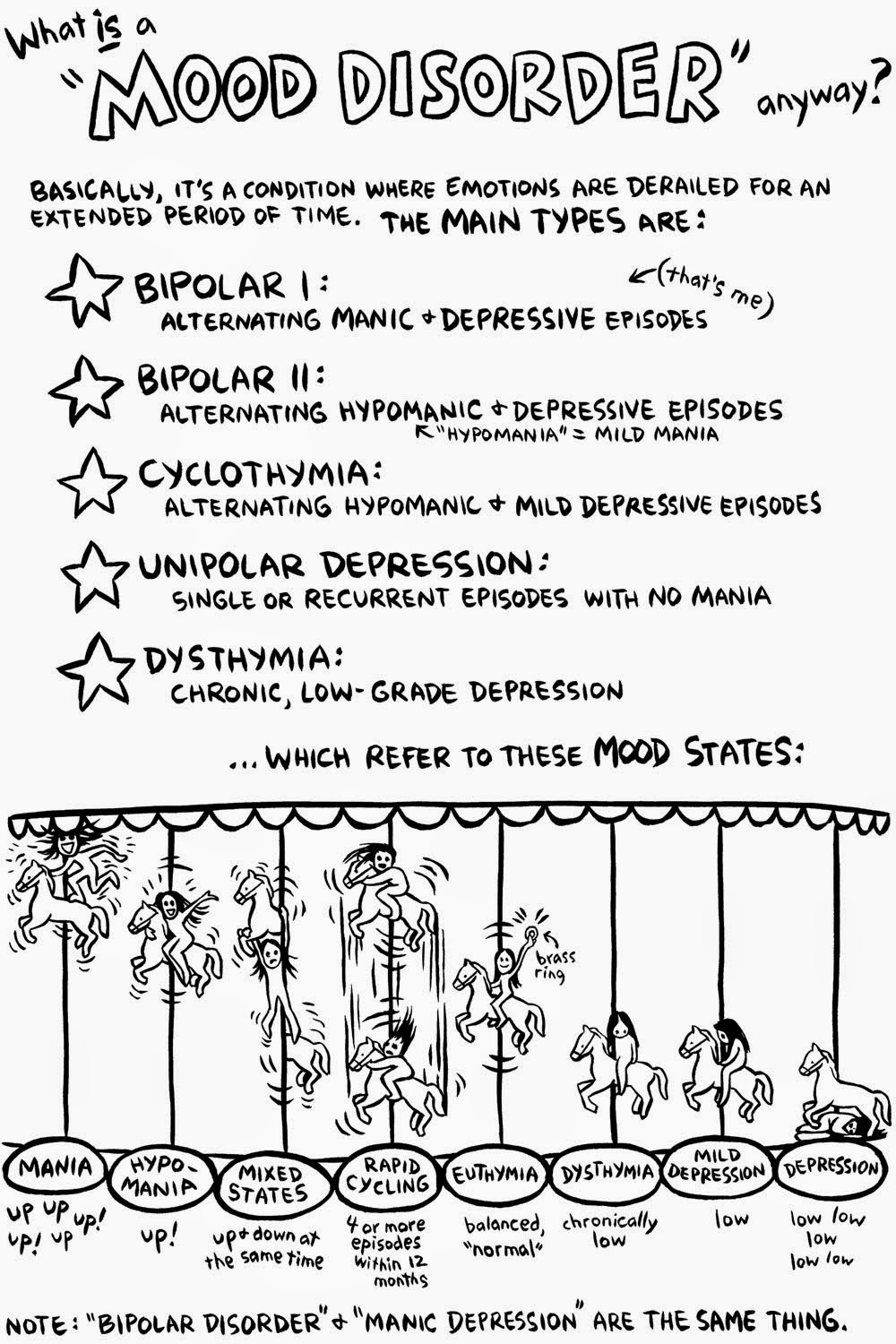