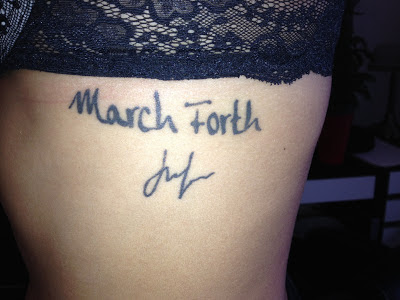 Today is March 4th and it is the birthday of my late father, Julian Hall. As a result of the date of his birth, his motto for life was his birthdate itself: March Forth. The photo is a picture of my tattoo I got this past summer. The squiggle underneath is my dad's signature.

My father was a brilliant, intellectual giant of a man. Although not in really in stature - he was tall and very, very skinny. He was a barrister and Member of Parliament in Bermuda. He was an imposing public figure who believed strongly in social justice, but was not without his own demons. He also suffered from depression and anxiety and he was from a time where the stigma of mental illness meant it was unlikely for him to get help. Since I've found some level of peace in myself after seeing the right psychiatrist, I wonder whether it would have worked for him. Then in floods regret. Coco Chanel once said "guilt is the cousin of death" and she was absolutely correct. I felt so much guilt in my grief. Even irrational things that I knew were not my fault. I just wished I could help my dad more in his life, but I have to keep reminding myself that he was the parent, not I, and that only he could have really helped himself. 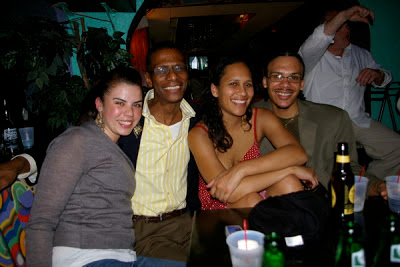 I sometimes feel his presence very strongly and at other times not at all. I can't control it, although I wish I could because sometimes I so desperately need his advice. When he passed away I was continuously told "you can still talk to him" and it angered me so much, because I might be able to talk to him but he cannot talk back to me or, if he can, I can't hear it. Those feelings of anger have subsided now and I understand that people were only trying to say the right thing, but the truth of it still sticks with me. However, in this week of his birthday I have been immensely comforted by what I sense to be his presence, energy and soul. On Thursday night I sat with my friend Zoe, who I'm staying with, and we talked and talked about my dad and I shared his obituary, photos and the article I wrote about him for the Bermuda Sun the week after he died (find it here). The next day I woke up to find an email from Gavin Djata from Chewstick who had found a photo of my father and I in their archives. I posted the photo (shown) on facebook and another friend remarked she'd had a dream about him that week. That day was also a day of some unrest in Bermuda. There was a protest that was taken to the House of Assembly and as a result I wondered what my father's opinion on all of it would be. I posted the following quote by him (before I had seen the news footage) from his 2005 speech, From Butchie with Love:

I am reminded when I read his work how clever and bright he was. How witty and wonderful. How tortured, yet funny. And when I see photos of him, how dashingly handsome.


Today is also the birthday of my dear friend Joshua Bowman. I taught him the meaning of March Forth when he visited me in Bermuda right after my father passed away. He took that and has run with it and uses it as his inspiration. In this article for Rolling Stone he says, "I'm born March 4th, but a great friend of mine, her father was a lawyer. He was born on my birthday and he came up with "March Forth." And I said, "I've got to take that, and I'm going to live it on for your father." He's unfortunately not alive anymore. So I'm kind of repping him. March on. Don't look in the rearview, just the windshield." I love that he paid homage to my Dad, who would have been delighted to be mentioned in Rolling Stone Magazine. I'm sure he's bragging in heaven to all that will listen.

The fact is that I've felt blessed today. I'd mentioned to a friend that I hoped my Dad would guide me through the day and give me some good luck. Well he did. I was selected for interview for a job I REALLY want and given some temporary work for a few weeks to carry me through until I find something permanent. I also nearly got into three accidents today. I forgot to look the right way and nearly got hit by a cab, then I didn't look into the road and my friend pulled me back as a car was coming, then I nearly collided with a cyclist. Someone was looking out for me today and I'm pretty sure he goes by the name Julian. Love and miss you something terrible Papa.
acting Chewstick Dad friends tv