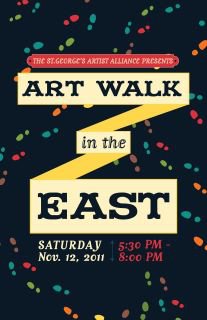 Yesterday I went with a large group of friends to the Art Walk in the East, part of the revitalisation of the old capital of Bermuda, St. George's. In LA I keep planning on going to the various art walks there, but as we all know life can sometimes get in the way. I didn't know what to expect and was worried that there wouldn't be a good turnout, but it was bustling and beautiful. The galleries were all open, some with live music, all with drinks and later Heather, Nick and I headed to Tavern by the Sea for dinner. We'd desperately wanted to try Wahoo's, but they had no room for us. I've had the same issue numerous times I've wanted to eat there. Must be sure to make a reservation next time! Along the route out of St. Geo we ran into six guys who had all sailed to Bermuda from Newport. Heather knew one of them so we kidnapped them and took them off to the Rugby Classic Closing Party at the field. Strangely enough today is the anniversary of the first ever Rugby World Cup, where England beat France. I didn't have as good a time there as Thursday night, but it was still an excellent evening out. Especially as I've been away for two months it was lovely seeing everyone.

I'm trying to stay committed to working out, as I've been utterly lazy since I left LA in June. Day 2 of P90x today and I'm still hurting from yesterday's work out. If I can't blog every day, I should at least commit to exercising every day....but I can tell this is going to hurt.

Today is World Kindness Day, which sounds a little cheesy, but is a sweet thing to celebrate. It was first introduced in 1998 by the World Kindess Movement, and is observed by many countries through random acts of kindness. In Singapore in 2009 45,000 flowers were given away. The philosophy behind it is that altruistic acts increase our own happiness. So do something kind for someone today.

On today, November 13th, in 1956 the US Supreme Court struck down laws allowing segregation on public buses. This grew out of the famous bus boycott which began in 1955, triggered by Rosa Parks.

Today is also the birthdate of Robert Louis Stevenson, author of Treasure Island and the Strange Case of Dr. Jekyll and Mr. Hyde. He provides us with the following quote:

"I have a little shadow that goes in and out with me, And what can be the use of him is more than I can see."