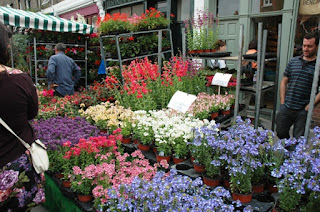 When I first got to London, my friend Anne suggested we all go for brunch at Columbia Road on the day of the flower market, which happens every Sunday. Unfortunately, we couldn't all get together, but it's been in my mind since then. So finally today, on my last Sunday I went with John to the market. It was absolutely beautiful. I couldn't believe how cheap the flowers were, being used to all the imported flowers in Bermuda, which are insanely pricey. There were orchids for a fiver, and my "brother" Raymond in New York is obsessed with orchids. I wished he was around so I could buy them for him. If I wasn't about to leave on Tuesday I would have scooped up loads. I have to admit the photo of the flowers isn't mine as I stupidly didn't take any pictures of the actual market. 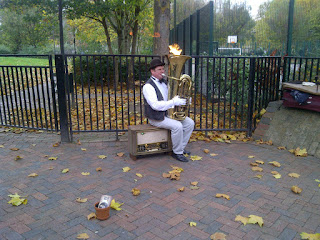 We had a lovely wander along the market, grabbed some food and coffee and proceeded to investigate all the vintage stores around. Some were incredibly pricey, but I found some good deals and bought a couple of tops and a beautiful brown leather mini-satchel type bag. At the end of our walk down Columbia Road we stopped upon a man playing the tuba, with FIRE coming out of the top (pictured). Continuing our walk towards Brick Lane I came across a cash point, which was amazing. What was so amazing about an ATM you might wonder? Well instead of the usual language options it only had two. English or Cockney. When it asked me if I wanted to withdraw "sausages and mash" instead of cash I thought it was brilliant. It also became the most sociable cash point I'd ever been to with everyone chatting in the line about it. At about 3pm, an acceptable time to start drinking methinks, we wandered to The Redchurch at the top of Brick Lane. It had the most delicious cocktails, only rivalled by the Library Bar at The Roosevelt Hotel in Hollywood, which has mixologists creating mysterious concoctions from a variety of ingredients in front of them. The Redchurch was pretty pricey, so we only stopped for one drink, but my Redchurch Mojito, with gingerbread and elderflower, was pretty special. Whilst sitting in the seats along the window I was spotted by my friend Greg, so it was a lovely surprise to see him twice in one week.

Today, in 1962, the UN General Assembly passed a resolution condemning Apartheid in South Africa. Sadly, it would be another 32 years before Apartheid was abolished, but credit is still due to the UN for their attempts to end it, even if it was 14 years following Apartheid's creation. Justice is better late than never, although as the saying by MLK goes "Justice delayed is justice denied."

Today is the birthday of Glenn Frey of The Eagles, so I'll share their Witchy Woman, as we've just had Halloween: