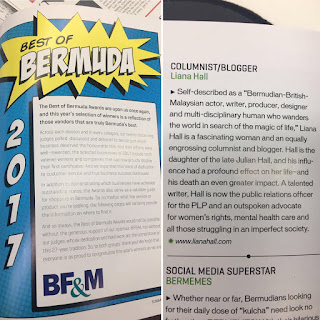 It's been a few weeks now - as it usually is between my blog posts and I know I must change. I will change. I have to now! Because I've been named in The Bermudian Magazine's Best of Bermuda 2017 awards as Best Columnist/Blogger. And when you're neglecting your blog as much as I am, the guilt is accentuated when you win an award for something you're neglecting. Yes, I've been writing columns about Pepper Spray and Women's Rights, which I must admit is much more frightening than blogging about the inner workings of my troubled mind. I received very good advice once, "Don't look down." This applies equally to tightroping over a cliff as to when you've written an opinion piece and are terrified of the comments (read: trolls).

I've been struggling with mania for months now, which is the opposite to my usual long bouts of depression. But I know the causes: it's lack of sleep, it's too much caffeine, it's lots of stress, it's biting off more than I can chew and it's this unforgiving obsession with being "good enough", because I feel that I never am. Yet, here I am, named "Best of Bermuda", so surely that provides some reprieve? Well, yes and no. It works momentarily until my mind wields another dagger to my self-esteem from nowhere and out of nothing.

But I must say, I am honoured and grateful and feel very blessed to be recognised. Thank you to all the judges for seeing in me what I can't see in myself.

One day, I'll get there.