It's Been A While

I know. I know. I feel that I say this to you a lot. It's been a while. I shower you with promises that I'll write more. That I'll stop neglecting you. That I'll prioritise you and care for you. Is this an abusive relationship where I'm the abuser? I hope not. Because I do mean what I say, but as goes the old adage 'actions speak louder than words'. So today is a day of action. Hopefully the beginning of many more.

Much has changed since we last connected. Those panics...well they've stopped. I don't mean slowed. I don't mean reduced. I mean stopped. I have lived with anxiety since I was about 21. I had always experienced depression from teenagedom, but the anxiety came later. It began to become unbearable in about 2008 and since then it's been a constant hum. It's always there, even if sometimes I don't really notice it. Like Bermuda tree-frogs at night. When you first come back to the island their song is deafening. You can't sleep because they're so loud. By the second night they are just 'there' and  you know it, but you don't constantly acknowledge it because if you did you'd 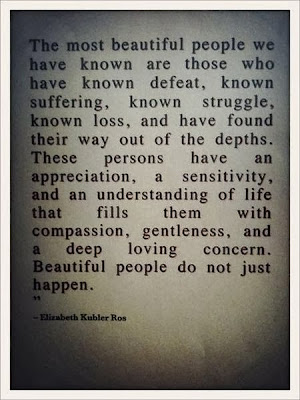 go mad. My anxiety has been a background noise that sometimes rises to a head-crushing, eardrum-destroying cacophony of anxiety that leads to a panic attack. Now I've said that those panics are gone. But it's not just that. The background hum, the constant stream, the erratic song, well it's gone too. And that miracle, my dear, dear reader is a cause for celebration.

Perhaps that's why I've been so apprehensive about blogging. Because I've been happy, content, calm, serene and I've been scared that those feelings will depart from me and it'll leave me (and you) feeling disenchanted.

How has this happened? I have gained a feeling in life that I thought would always escape me. There are more days than not that I have woken up since I entered adolescence thinking "I'm awake again...and that's not where I want to be." And that, well, that is gone.

Where do I begin to explain how? Well, I'll start by admitting, that until December of last year I had taken daily anti-anxieties for nearly four years. It began as mere beta-blockers and then became valium, temazepam, lorazepam, Xanax and Haloperidol and sometimes a combination of those things. Did I understand the danger? Well, yes I did. And although since my suicide attempt I had yearned more for life I couldn't quite bring myself to care, because coping with life seemed more important. When my father was dying it reached unexplainable heights. I just did not know how to cope with life. I could not live life on life's terms. I had no other way of understanding how to deal with things, so I took other things to dull the pain. And I was dulled. I was constantly not quite there. I felt dead behind the eyes, but it didn't occur to me that the pills were part of the problem. I thought they were the solution. Turns out they weren't...and so I quit taking them.

And there begins the journey. It certainly hasn't been an easy road, I can tell you that much. There are times since I quit the pills that I have wondered if I'm losing my mind. That road has not been smoothed with tarmac, but it has been like a third world-country back route with land-mines that must be crept past lest they amputate a limb or blow up the whole damn truck. Yet, ten months later, here I find myself able to cope without any of it. I like to think there is brightness again behind those eyes that hasn't been there since I was a child, before life began to take its heavy toll.

....in the middle of writing this post I just got a call with some very exciting news that I can't share yet. But I will say that life is good. And life is life. Breathing. Healing. Cyclical. Beautiful. Alive. Grateful doesn't even begin to describe me.