February 27, 2012
It has been MONTHS since I've blogged, and yes there has been plenty to celebrate. With The Year of Celebration ending on March 31st, I figured I needed to start up again. I've just discovered Pinterest and I am in a word, OBSESSED. I could spend all day on that thing, it's like having a movable mood board. And I'm not one for liking a lot of solid paperwork around as I move so much, I'm definitely a keen member of the digital generation. My pinterest board is here. 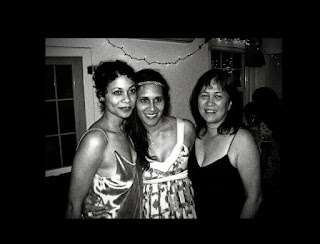 It was my sister Nadia's 30th birthday a couple of weeks ago (picture of my Nadia and my mother Isabella at the party), and obviously that was a huge thing to celebrate. We bought a bunch of glasses from the Barn, and there were some old school 1920s style champagne glasses, so it felt a little art deco. There were fairy lights and tea lights everywhere. We started with a delicious dinner made by Nadia and the chef at Taste, Tammy for 30 people. Afterwards there was a raging house party with god knows how many people (my memory is a bit shot from that night). All in all, a lot of fun. My little sister turns 21 this year, and my aunt turns 65 so there's a lot to celebrate in the coming months.


I've been in Bermuda since December (after a 2-month London excursion, followed by a couple of weeks in NYC for my Continuing Legal Education course). After a while of looking I found a job, but it's truly not what I want to do. I'm in it to pay off my debt so I can move back to LA by the end of the year. I figure I need to be sensible right now, so I get through each day by doing that (and writing my novel in my spare time). I've gotta say I'm really impressed with all my friends recently. Everyone's dreams seem to be coming true. Alexandra Chong has started Luluvise and is featured in tons of media publications. Katharine Hirst is the new MD of DropGifts. Mia Chambray just got signed by a management company for her music for Mohawk Radio. Josh Bowman is on all sorts of magazine covers for his acting work in Revenge. Gabrielle Lott who is editor at Little Black Book. Weronika Rosati is starring in the new HBO drama series Luck. Jing Lusi who starred in The Malay Chronicles: Blood Lines, and is now playing Tara Lo in Holby City. Lee Hirsch's film Bully was bought by The Weinstein Company and is being distributed in March (please go here and sign the petition to lower it's rating from R to PG-13 to open it to wider audiences).  It makes me feel like life is full of possibilities and my dreams aren't that far out of reach.


Today is Elizabeth Taylor's birthday. What. A. Legend. Celebrating her life is easy. She was a huge advocate for AIDS patients, creating the Elizabeth Taylor AIDS Foundation. Here's a phenomenal scene where Cleopatra enters Rome.